This work is licensed under a Creative Commons Attribution-NonCommercial-NoDerivatives 4.0 International License.

I’m sitting at my computer screen drinking a glass of wine and listening to soft acoustic music, willing the words to come. The moment is growing more and more cliche. I have a million thoughts racing around my head and I can’t seem to get them in order, a common first step in my writing process. I want to talk about love and progress and self-betterment and the past–all these things that filled the last year of my life.

In an attempt to spark some inspiration, I rifle through old journal postings and blog posts. I scribble down notes and quotes from both strangers and myself. And then I come upon a comment someone left on a post I had written a year ago. It reads:

“Thank you for believing in us (Men) I mean to say. It hasn’t been easy to keep my reflection in my love’s eyes. I am striving to be that person but sometimes fear of losing the person she actually fell in love with. It’s kind of ironic don’t you think? Time changes everyone and a good woman will make a good man. But why make and not accept. I love with all but fear at times that’s not what she wants constantly but more what she wants as a constant. It’s all the other things to do that makes me forget who I am and think of who I want to be. So well I’m done just thanks.”

So, here goes nothing: 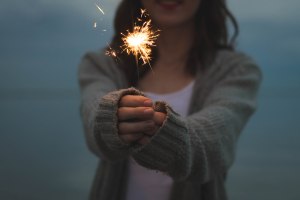 The road, barely visible beyond the dim glow of his headlights, was wet. It had been a damp and foggy autumn and tonight was no different. We were on our way to pick up booze from a local store I would highjack for 40-proof gin with a group of friends. He was driving fast. How fast, I couldn’t see.

Falling in love at 16 seems a lot sillier now than it did at the time. As the smoke cleared and I looked over at him in the driver’s seat with his eyes closed, my heart dropped in my chest. The moment lasted just a second but in that second, I lived an eternity of fear. It was here, with seatbelt burn and a steaming engine, that I learned I loved him.

From that point on, nothing else seemed to matter. My life as I knew it was over and this new phase had begun. My happiness grew roots in the comfort of his embrace and I no longer searched for missing pieces of myself, as it seemed to be right in front of me.

I loved the love that we shared but even then, as I’ve said before, I should have felt the danger in its meteoric bliss. It was intense. It engulfed you like the first days of spring…but time drew on as it naturally does and with time comes change. Well, maybe it’s not change so much as it is knowledge. Knowledge of the person that came before the fire and the person that lies somewhere beyond the imminent ashes, beyond  the comfort of your love.

We tip toed around each other, and the reality we were living in, out of fear that any sudden change might unplug the damn. Soon enough the water swelled too high for anyone to contain.

The period of mourning that followed was ugly and twisted. It started with blaming and hating him and then turned to embarrassment and regret. I had lost everything I had known and, even if for a brief time, everything that defined me.

I carried the love lost around like a phantom limb. I’d take walks alone in an attempt to grow comfortable with myself. I found myself looking over my shoulder to show him pretty houses and tiny creatures. My heart swelled during love songs and romantic movies, as if I had something similar of my own, and then I’d remember that I was alone–leaving me feeling empty. limbless.

But just as before, time went on.

It took me longer than I’d like to admit to get over him–a truth I think many of us can relate to. We’re given all these guidelines about when you should be “over” something and often feel wrong when that’s not the case. It made me feel weak, dirty and deceitful. Let me take a moment to tell you that I think this is normal, for what it’s worth. I believe there will always be parts of us that hold on to what once was. I think it’s human nature. The trick for me was finding what it was about that memory that kept me coming back. I then tried to remember who I was back then. Did I like myself? Was I happier?

Answers, which you can probably guess, that always came up No.

It has been around two years. I am in a new place, a new relationship and, from a comparison stand point, a new life. The reason I’ve brought you this far into my past however, is that I continue to learn from those memories.

In those memories that I held on to, I did not know myself. My “happiness” was rooted in an idea that was not my own, which is why at the end of the day I felt so detached. I was living a full life but it was not a life that was mine.

I needed to find myself. (ugh, the cliche of it all really does burn doesn’t it?)

I needed to find the girl who sat up at wee hours of the night typing to potentially non-existent readers, the woman who… blah blah blah [drones on about adorable quirks and hobbies]

…and what I learned while finding myself in the months that followed was that I had to let go of the romantic I once was in order to find romance.

I was trapped in this idea that ones entire self had to be given into love–sacrificed. And what I found, and am still finding, is that the love I wanted is exactly the opposite. The love I know now may not be just like the first days of spring but, instead, like cool, calming days of autumn. At times, it is also the sun soaked days of summers and bundled up nights of winter.

It’s not the warmth you’ve been craving or missing through a bleak and miserable winter but a welcomed change of pace. It grows and changes with the seasons of your life.

“Because growth and letting go are so complexly intertwined that we often only see one or the other. We forget that they can exist side by side – releasing the old while letting in the new.”